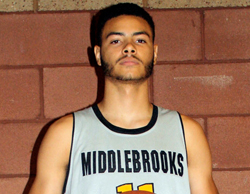 Your Support at Work: Derrien King Commits To Washington State

Derrien King (Middlebrooks Academy) has committed to Washington State. Having passed on offers from Hampton University and Bryant University for the Class of 2014, King became a top target as a member of the Class of 2015. King acquired offers from UTEP, Nevada, Utah State, Cal State Fullerton and Cal State Bakersfield before committing to the Cougars.

Coach Middlebrooks expressed, “We are very excited that Derrien King will represent our program at Washington State University in the Pac-12. I have long believed that Derrien was a tremendous talent and given enough time the right opportunity for him would come along. That opportunity has now arrived.”

Middlebrooks continued, “The signing of King is representative of his hard work and determination. It is also the result of the various supporters that have made our program possible at Middlebrooks Academy. This is a joyous day for King’s family as well as everyone involved with both Middlebrooks Academy and Dunking Frogs Foundation. Derrien is also a graduate of Cathedral High School and the entire Phantom Nation should be proud!”